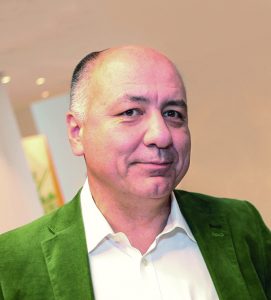 Genetics or bacterial colony – which is responsible for chronic inflammatory bowel diseases (IBD) such as Crohn’s disease or Ulcerative colitis? To answer this question, M.A. Anita Frauwallner interviewed PhD. Stefan Schreiber of the Christian-Albrechts-University in Kiel, one of the most prominent researchers in the field of gastroenterology and an impressive doctor – a specialist on patients with inflammatory bowel disease (IBD). The expert explains the connection between genetics and the microbiome, and what role probiotics could play in the therapy.

Mag. Anita Frauwallner: You spend a lot of time in the clinic and researching inflammatory bowel disease and its connection with genetics. What impression can you give our readers concerning this topic?

PhD Stefan Schreiber: The exciting thing about inflammatory bowel diseases is that it practically didn’t exist before the Second World War.  Afterwards, the frequency of the disease increased drastically and eventually resulted in 0,5-1% of the population, depending on which region, being affected. The growth of these diseases can’t really have anything to do with our genetics though – because our gene sequence hasn’t changed in the last 70 years. Nevertheless, we can still gain some information about the cause of the disease thanks to genetics.

Mag. Frauwallner: The human genome was deciphered in 2003, so it’s still a very young field of study. Can we nevertheless already draw conclusions for the therapy of inflammatory bowel diseases?

PhD Schreiber: There are several gene variants, whose carriers have a higher risk of developing certain diseases – in the case of inflammatory bowel diseases, we can’t draw any useful conclusions from the gene variants. One of them is the so-called NOD2-gene: The carriers of the disease variants of this gene indeed do have a slightly higher risk to develop IBD, however, it is so minimal that it does not play a role in the consultation of adult patients. On the other hand, it does make sense to have a look at the genome of children: the early onset of these „chronic widespread diseases“ is heavily influenced by genetic factors. If we can identify the responsible genes, we can then treat the cause – and not just the symptoms.

Mag. Frauwallner: It is obviously not the genes alone because not every adult that carries the disease gene develops inflammatory bowel disease. Your field of research involves discovering what influence the microbiome has in the development of diseases. What insights have you already managed to gain?

PhD Schreiber: That is an especially interesting field, just because the bacteria that inhabit our intestines have a whole lot more genetic information than us humans. This population, however, isn’t accidental: There are so-called Enterotypes (=common population variants) – that you can sort of compare with blood types. That means that the microbiome isn’t completely different in every aspect of every person, but rather that certain bacteria strains can occur in certain combinations in a big group of people in similar combinations.

These Enterotypes have nothing to do with the disease, however, their stability (and resilience) does: This means that the microbiome is resistant to outside influences, e.g. antibiotic therapy: Over time, antibiotics upset the balance of bacteria in our organism – a resilient microbiome recovers though, and ideally puts everything back into its original state. Regarding the influence of the microbiome on diseases, it has meanwhile been proven that certain conditions directly correspond to a less efficient intestinal flora.

The question you must now be asking is how we can measure the efficiency of the microbiome. A very important criterion for this is diversity, or in other words, the presence of many different organisms that complement each other. We know from nature that an ecosystem, e.g. a forest, is an interaction between many different microorganisms and that a monoculture of only a single plant would not survive over time.

The same can be said for our intestinal flora: The more different the germs we have, the better. A large diversity protects us against pathogenic outside influences, such as germs (e.g. after an antibiotic therapy or foods that enter our body) or infections. 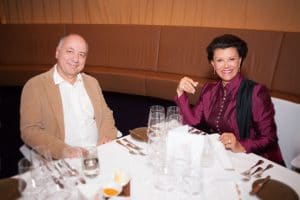 Mag. Frauwallner: That must mean then, that an altered intestinal flora can heavily affect diseases but that our genome obviously also plays an important role. Are there already substantial findings whether the combination of a damaged microbiome and certain genes influence the development of diseases?

PhD Schreiber: Yes. For me, the most impressive results we have for this was shown in an animal model system with two groups of mice. In the first group, we removed a certain gene called ATG6L1 from the animals. By removing this gene, there are no so-called Paneth-cells left in the digestive system. These cells are responsible for the local immune defence and probably also help preserve the integrity of the intestinal mucosa.

Consequently, we can construct the following hypothesis: Maybe there is no intestinal flora that causes diseases, and maybe a lacking diversity doesn’t influence the development of diseases. Instead, we should maybe observe how the individual intestinal flora – however good or bad it may be – changes and recovers.

Mag. Frauwallner: You studied this using identical twins, correct? As far as I know, you studied the intestinal flora of identical twins, of which, one of them suffered from inflammatory bowel disease and the other one didn’t. What was the outcome of this fascinating experiment?

PhD. Schreiber: Only one of the twins developed IBD, although they had the same genes.  Why is that? At first glance, genes apparently don’t play a role because twins have a nearly identical DNA. But if we look closely, something very interesting comes to light:

What does this now mean for us? Apparently, there are a whole lot of influencing factors, none of which are solely responsible for the development of IBD. There is, however, a distinct dissociation between the genes and microbiome. That means that from now on, genetic predispositions and an altered microbiome can equally lead to the development of IBD. Furthermore, it seems a genetic diversity is just as important for our gut bacteria.

We definitely know that a change in our microbiome precedes the manifestation of intestinal diseases. There is probably a metastability when we are born that prolongs the onset of the disease, but collapses after exposure to outer influences, such as antibiotics. If the microbiome is changed, it is by chance and that means that not always the same bacterial strains are affected. The result is that our entire cooperative metabolism within our microbiome and our body is disturbed, including the absorption and digestion of food in our body.

Mag. Frauwallner: What does this mean exactly for the treatment of inflammatory bowel diseases? To what extent does it make sense to positively affect the microbiome by giving, for example, probiotics?

PhD. Schreiber: A therapeutic approach that could, to some extent, „improve“ the microbiome in certain inflammatory bowel diseases, is indeed the administration of probiotics.  With that, we can, by all means, increase the diversity. At the moment, there are many small studies involving probiotics. A meta-analysis (an analysis involving many studies) shows an advantage over the placebo groups. The microbiome is, therefore, an important starting point for the adjuvant therapy – even though the research is only just beginning – and probiotics are surely an excellent option.

This approach must definitely be followed up by large studies to confirm the effect of probiotics. In the future, the microbiome could possibly serve as a biomarker, upon which we can base our therapy and measure our results.

Mag. Frauwallner: Thank you very much for this intriguing conversation – we are looking forward to being a part of this research!

*Prof. Dr. Stefan Schreiber is the director of the Clinic of Internal Medicine and the Inflammation Center of Competence, as well as the Institute of Medical Microbiology at the Christian-Albrechts-University in Kiel. Furthermore, he has been the president of the German Society of Probiotic Medicine for many years.

The term „inflammatory bowel diseases“, or IBD, refers to the summary of all disease patterns that include intermittently recurring or permanently lasting bowel inflammation.

Crohn’s disease is characterised by varying intestinal inflammation, of which not only the mucosa but also the underlying sections of the intestine are affected. This can lead to the development of ulcers and/or constrictions. Furthermore, connections (fistula) can occur between other organs and surrounding tissue. The disease can affect the entire gastrointestinal tract, all the way from the mouth until the anus. The last portion of the small intestines is most frequently affected (Ileum) as well as the first portion of the colon. Typically, healthy and diseased sections are alternately present.

Not all the layers are affected by ulcerative colitis, only the mucosa and underlying loose connective tissue (Submucosa). In severe cases, ulcers can occur. The disease is recurring and effects, in comparison to Crohn’s disease, almost exclusively the colon and in rare cases, the lower section of the small intestines. Typically, symptoms change between bloody diarrhoea and cramping while defecating, and periods in which there are only mild or no symptoms.