Could the cause of Parkinson’s Disease possibly lie in the intestines? A recent study on mice provides more information concerning this hypothesis. It shows how proteins travel from the intestines and are deposited in the brain. 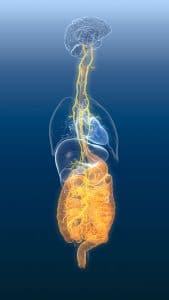 According to a recent study, Parkinson’s is caused by proteins in the intestines. This hypothesis has been discussed for 15 years and has yet to be confirmed. Current experiments, however, provide new insights.

Proteins take the path of the vagus nerve

Neurologists and scientists at the Institute for Cell Engineering at the John Hopkins University School of Medicine in Baltimore injected recombinant Alpha-Synuclein into the walls of the stomach and duodenum of mice. Several months later, the researchers were able to find the protein in the mice’s brains. The injection also caused a Parkinson-like disease. The scientists suspected that the proteins reached the brain via the vagus nerve. When the researchers severed the nerve, no deposits were found in the brains and the mice remained free of the disease. Deposits of this protein are a part of so-called Lewy-Bodies, which can be found in the brains of affected patients. As a result, we can assume that Alpha-Synuclein plays a central role in the pathogenesis of Parkinson’s.

So the study shows that Alpha-Synuclein can travel from the gut into the brain, however, it is not yet confirmed as the cause of Parkinson’s disease. Older studies show that the protein can also go the other way – i.e., from the brain to the intestines. The next step is to find out how this process is even set in motion.