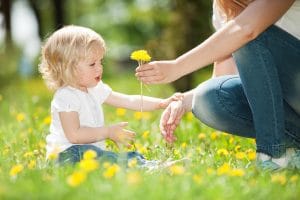 The risk of developing an allergy depends on your genes. If someone in a family is oversensitive towards, for example, pollen, animal hairs or certain foods, there is a higher likelihood of their offspring developing an allergy. If both parents are affected, the probability of having a so-called atopic disease is as high as 60 to 80%.

A healthy intestinal flora, however, can substantially lower the chances since 80% of all immune cells are in the intestines. By now it has been proven that there are more clostridia („bad“ germs) and fewer „good“ bifidobacteria in the stool of allergic children than in that of children without allergies. Mothers can already create a healthier balance in their own intestines during pregnancy by taking probiotics and therefore strengthening the immune system of their child. While in the mother’s tummy, a baby’s digestive tract is sterile. But during birth, the baby’s intestine is colonised by a variety of germs. The building blocks of an intact defence mechanism are laid in the first weeks after birth.

The PandA-Study („Probiotics and Allergy“) confirmed the positive effect of the intake of probiotics on the resistance against allergies in children. The study involved about 160 babies with a high allergy disposition and were divided, with their mothers, into two groups. In the one group, the women took a bag of OMNi-BiOTiC® PANDA daily in the last 6 weeks of their pregnancy and also gave their children the probiotic daily in the first year after birth. In the other group, the women and their babies consumed a placebo over the same period of time. The probiotic group clearly showed better results: Only 10% of the children developed an atopic or asthmatic disease before their first birthday – in the placebo group, however, every second child was affected (50%). The positive effect on the children in the probiotic group was felt even 2 years afterwards, even though the children weren’t treated with probiotics anymore.

Support for the baby’s immune system

But there are other factors that can also influence the risk of developing an allergy in unborn children: Mother’s should have highly variable, vitamin and mineral rich diet since the baby is and eats what the mother eats. Nicotine consumption or spending time in a smoky room can assist the progression of allergies in children. Another important factor is how the child is born: If a baby is delivered via C-section, it lacks the important contact with the mother’s vaginal flora. It is especially important to build up the intestinal flora and create a balanced ratio of all intestinal inhabitants in such children.