What role which bacteria species play in this context and at which age children should come into contact with them, was studied by scientists using household dust. 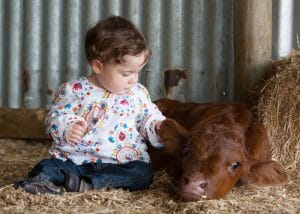 Scientists at the Finnish National Institute for Health and Welfare in Kuopio recently discovered which bacteria have a beneficial impact on the immune system of children. They analysed the composition of household dust in the living rooms of more than 400 families that had infants with an average age of two months at home. This stage of life is considered to be one of the most important in the development of the immune system. The researchers assumed that the first few months of life determines whether a child develops an allergy later in life or not.

The team of Pirkka Kirjavainen first had a look at the household dust of families that lived on traditional farms. They mainly found bacteria that are also found in barns such as Bacteroidales, Clostridiales, and Lactobacillales (lactic acid bacteria). Furthermore, they also found so-called Methanobrevibacter, which are found in the rumen of cows. In comparison, scientists mainly found staphylococci and streptococci in the dust probes of living rooms in the suburbs.

The researchers, who only recently published their results in the NATURE journal, also admitted that they found a „farm-like“ composition in old houses within the suburbs, especially in houses with higher humidity and where the occupants where their street shoes indoors. Interestingly, the presence of siblings increased the number of farm bacteria. In newly built houses with only one child, the number of farm bacteria that help develop the immunological tolerance in children was significantly reduced.