Is the gut flora making our liver sick? 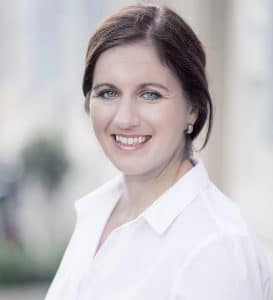 Liver cirrhosis, the terminal stage of many chronic liver diseases, is becoming increasingly widespread. The composition of the gut flora in people suffering from liver cirrhosis is severely disturbed. With the help of modern laboratory techniques, it has become possible to verify that there is a reduction of diversity and a predominance of pathogenic germs in the guts of liver cirrhosis patients.

An “oralisation” of the gut microbiome is especially suspicious. This means germs from the mouth can be found in increased numbers within the gut. At the same time the number of bacteria which have a positive effect on humans decreases. The implications of such changes in the gut flora are an increased permeability of the gut (a “leaky gut”) and the passing over of bacterial components into the blood stream. This leads to a chronic overburdening of the patient’s immune system which subsequently leads to the development of an immunodeficiency. This in turn presents itself in the form of frequent dangerous infections. Thus, the gut-liver axis plays a substantial role in the development of chronic liver diseases.

The current therapy strategies for liver cirrhosis are based on treatment or prevention of complications such as oesophageal bleeding or hepatic coma. Liver function can only by improved sustainably if either the cause for the liver cirrhosis (such as alcohol or hepatitis) can be resolved or by means of a liver transplantation. Therefore, it is definitely preferable to fight the negative effects of liver cirrhosis while the disease is still at an early stage.

According to the definition from the WHO (World Health Organisation), probiotics are “living microorganisms which when taken in a sufficient quantity have a health-promoting effect”. Via direct and indirect mechanisms, they can positively influence the gut-liver axis. For example, probiotic germs can drive out other pathogenic germs, strengthen the intestinal barrier, and have a balancing effect on the intestinal immune system. There are reports that probiotics can positively influence the development and severity of hepatic coma.

Therefore, we evaluated the effects of a probiotic on patients with liver cirrhosis at the Medical University of Graz. We carried out a double blinded, randomised, placebo controlled study. This means that half of the patients received the probiotic and the other half received a product which looked and tasted identical but contained no active bacteria. We evaluated the effects on the gut microbiome, the gut-liver axis, and liver function. We examined 101 patients to check if they were suitable for the study and could finally include 92 of them. The study participants received a specially developed probiotic, the dietary supplement OMNi-BiOTiC® HETOX or a placebo. Afterwards the patients were observed for another 6 months. Most of them concluded the study as planned; only a small portion dropped out early. Interestingly only one patient from the probiotic group decided to drop out, while 11 dropped out in the placebo group. This striking difference could mean that the patients in the probiotic group simply felt better in general and were therefore able to attend all the study visits despite their chronic disease. The participants were also extremely exact when it came to the correct dosage; virtually all sachets with the trial drug were taken. As expected, the patients suffering from liver cirrhosis had a radically changed gut flora. To some extent these alterations could be reversed by the application of the probiotic. Furthermore, an enrichment of the stool with lactobacilli could be shown in the patients which received the probiotic. This shows that the probiotic germs can colonise the gut at least for a little while. 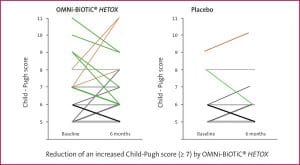 Improvement of liver function during administration of OMNi-BiOTiC® HETOX shown with a reduction of an increased Child-Pugh score (green line).

The study’s most important finding: The improvement of the patients’ liver function was especially significant when the disease was already at an advanced stage. Moreover, the evaluated laboratory parameters showed a significant strengthening of the innate immune system. Fittingly, less study participants in the group receiving the probiotic suffered from infections. We also asked the patients if their quality of life had changed in any way. Encouragingly, we found that the probiotic led to an improvement in life quality.

In conclusion, with this study we were able to show that probiotics provide a good opportunity to improve liver function, immune function, and quality of life in people suffering from liver cirrhosis by positively influencing the gut flora.

Every 370th person suffers from liver cirrhosis. In many developed countries, the disease has become one of the top ten most common causes of death. Many don’t even know they have liver cirrhosis as the symptoms are oftentimes unspecific (for example tiredness, reduced performance, and lack of appetite). Patients with liver cirrhosis often die from complications such as hepatic coma, kidney failure, bleeding, or liver cancer. Liver cancer almost always develops due to pre-existing liver cirrhosis and can only be healed if detected early.

Alcohol, obesity, and chronic viral hepatitis are the most common causes of liver cirrhosis. Men are affected twice as often as women. Patients with liver cirrhosis must get a medical examination at least every 6 months. The exam should include a blood test and a sonogram. The latter is essential to detect liver cancer at an early stage. If the liver cirrhosis is already at an advanced stage then only a liver transplant can help. However, due to the scarcity of suitable donor organs not every patient with liver cirrhosis will be able to receive a transplant.

What is good for the liver – what can harm it?

The liver is an organ which is essential for the body’s metabolism and detoxification. Everything that we ingest, be it food, pharmaceuticals, or toxic substances like alcohol, must by broken down by the liver. Detox therapies with plant-based remedies can oftentimes cause more harm than benefit. This is because plant-based products oftentimes contain high amounts of a certain active substance which may be converted into even more toxic breakdown products in the liver. When a liver has already been harmed it is best to burden it as little as possible.

Good for the liver:

A close relationship between the gut and liver: All nutrients (and toxic substances) which are absorbed by the gut during the digestive process go straight to the liver via the portal vein. Once there, depending on demand, the absorbed nutrients can either be utilised directly, converted, or stored. Toxic substances are broken down before they are released into our circulation and can only then reach the rest of the body.