Irritable Bowel Syndrome and The Microbiome

About 1 out of 5 people suffer from irritable bowel syndrome – symptoms such as diarrhoea, flatulence and pain impair the quality of life and even the ability to work for some people. Mag. Anita Frauwallner discusses the central role of our intestinal flora in irritable bowel syndrome and what conclusions we can draw from recent studies involving the use of probiotics for IBS with study author DDr. Adrian Moser. 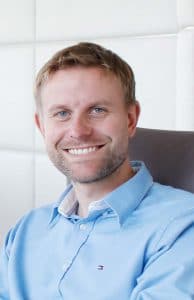 Mag. Anita Frauwallner: An increasing number of people suffer from IBS or know of people with this condition through family and friends. This brings me to my first question: What is an irritable bowel syndrome exactly? And what leads to the digestive tract having such problems?

DDr. Adrian Moser: Patients with an irritable bowel syndrome/IBS suffer from chronic intestinal issues such as stomach pains, flatulence and changes in bowel movements. These symptoms severely impair the quality of life for many. Irritable bowel syndrome is usually a diagnosis by exclusion, in other words, other causes (i.e. chronic inflammatory bowel diseases, coeliac disease, intolerances or parasitic infections) for the patient’s symptoms need to be excluded by the doctor. Only when no other cause can be found, can we diagnose IBS.

The reason why our digestive tract flares up with these symptoms is not quite understood yet. We do assume, however, that there is a problem with or an inadequate colonisation of the intestinal flora. This doesn’t only affect the composition of the bacterial strains, i.e. the diversity, but also the messenger substances produced by the microbiome.

Mag. Anita Frauwallner: What are the causes that lead to such severe complaints in patients with IBS?

Undisputed, however, is that the functional axis between the digestive tract and the brain is highly active in patients with such problems and that the changes to the intestinal flora can have a profound impact on our psyche. Diet also plays a big part in this context since we can influence the composition of our intestinal flora through the food that we eat: The treatment of irritable bowel syndrome advises patients to refrain from eating several substances such as lactose, fructose and other foods that are likely to cause gas (FODMAPs). This often reduces symptoms even though it is difficult to carry out in day-to-day life.

Studies confirm that a change in diet can also have a positive effect on our psyche and help, for example, with depression: Many of our neurotransmitters are produced in our intestines. If our bowel is supported by a healthy diet, the production of messenger substances is improved and, as a result, our psyche too. We basically kill two birds with one stone when treating patients with IBS by positively influencing the intestines and the psyche at the same time.

Mag. Anita Frauwallner: This sounds like a very complex medical condition.  Is this reflected in the treatment or is there a standard therapy offered to patients?

DDr. Adrian Moser:  The treatment is different for every patient and should be tailored to their individual background, needs and symptoms. A change in lifestyle can have a big impact on improving symptoms: The topic „diet“ doesn’t only include healthy food (freshly-made, regional and balanced food vs industrially produced meals) but also regular mealtimes, which are essential for the intestines. Physical activity is also a very important factor and can have a very positive impact on intestinal motility and the general symptoms of IBS.

Furthermore, symptoms can be treated using different medications, depending on the symptoms of the individual patients. If a patient suffers from excessive flatulence, anti-bloating tablets are prescribed, whereas patients with diarrhoea receive remedies that firm up the stool and patients with constipation often receive a laxative. Even probiotics have been used and showed promising results in one meta-analysis involving several studies. Especially irritable bowel syndrome patients with diarrhoea can profit from probiotics.

Mag. Anita Frauwallner: You mentioned earlier that irritable bowel syndrome has a strong connection to the microbiome. Can you explain this correlation in more detail? 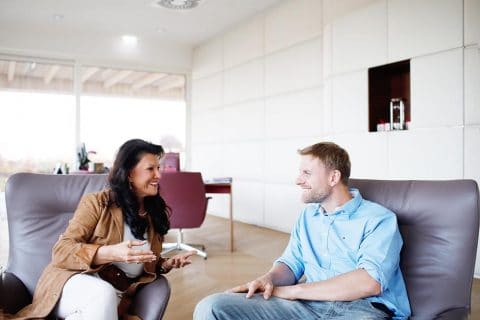 DDr. Adrian Moser: Evidence is growing that the development and composition, as well as the functionality of the microbiome, is impaired in patients with irritable bowel syndrome and this only has negative consequences on the mucosa of the intestines. Immune cells and neurons can be found in the mucosa and are influenced by messenger substances. For example, an increased secretion of inflammatory substances can lead to a change in neural activity. The nerves are overactive and can be the cause of pain, as well as flatulence and diarrhoea.

Mag. Anita Frauwallner: The analysis of these connections and their impact have already been the subject of studies here at Institut AllergoSan – but now to your study which was recently published: You studied the effect that synbiotics (a combination of probiotic bacteria and the prebiotic food they need to survive) have on patients with IBS. What is so special about this study and what conclusions have you been able to reach?

DDr. Adrian Moser: We started the study by reflecting on the following aspects: Where could synbiotics have an effect on the digestive tract – rather the upper or lower intestines – and which level would they influence – the intestinal flora, their messenger substances or metabolic products? Or can they have a direct effect on the immune cells in the intestinal mucosa? We wanted to examine these reflections by conducting a pilot study including 10 patients with the diarrhoea-type IBS. The special thing about this study was its scale: We conducted a colonoscopy on every patient before and after a 4 week synbiotic-therapy in which we collected tissue samples from the upper and lower sections of the intestines.

We also gathered stool samples from every patient. All of these samples were then analysed using complex procedures to determine whether the microbiome in the intestinal mucosa and stool had changed, whether there was an impact on the messenger substances and whether the immunes cells in the intestinal mucosa were influenced by the synbiotic. The pilot study shows whether our theory could actually work, however, it is not placebo-controlled and therefore can only point us in the right direction. Nevertheless, we still had some really interesting results:

Particularly impressive was the fact that the synbiotics had a strong influence on the diversity of the microbiome in the upper bowel segment. Furthermore, the production of the short-chain fatty acids butyrate and acetate increased significantly. Short-chain fatty acids have an anti-inflammatory effect on the intestinal mucosa and are an important energy provider to keep the mucosal cells healthy and maintain the intestinal barrier. We were also able to identify an effect on the immune cells in the colon mucosa. Beyond all of these biological parameters, we also analysed the severity of the irritable bowel syndrome, and even here, patients felt a significant improvement which also had a positive effect on their quality of life.

Our pilot study offers strong evidence that the diversity and functionality of the microbiome and immune cells, as well as the severity of the disease, can be positively influenced through synbiotics.

Mag. Anita Frauwallner: What do you think about the future importance of probiotics in the treatment of irritable bowel syndrome – based on your results?

DDr. Adrian Moser: I think that probiotics will definitely gain huge importance. Many studies will be conducted in the near future concerning the individual strains and the targeted composition of probiotics. This is especially exciting for the treatment of irritable bowel syndrome as probiotics could offer a cause-related treatment without side-effects. I not only think that the gut-brain-axis plays a central role in irritable bowel syndrome but also that other diseases such as Alzheimer’s or Parkinson’s can be positively influenced through the use of targeted probiotic substances.

Mag. Anita Frauwallner: Thank you so much for your time!

*DDr. Adrian Moser specialises on the interaction between the intestinal flora and immune disorders in his work and has already published several studies concerning different aspects of this topic.

How to identify irritable bowel syndrome

You may suffer from irritable bowel syndrome/IBS if the following 3 criteria are fulfilled: