a pillar of female wellbeing

A healthy microbiome is responsible for keeping the body safe from the invasion of harmful substances in our surroundings as well as foreign microorganisms. As such, a powerful protective barrier like an intact mucosa is crucial and is usually strengthened by many healthy bacteria. Disturbances within the microbiome, also known as dysbiosis, are associated with countless diseases. In gynaecology, the vaginal microbiome is one of the main focal points of medical research. Especially when it could have a positive effect on female (genital) health and sustainably treat complaints such as thrush or bacterial vaginosis. The optimal vaginal flora composition is of great importance for the quality of life and health of a woman.

A healthy vaginal microbiome mainly consists of bacteria from the lactobacilli species. These bacteria act as an important protective shield against vaginal disturbances and infections such as bacterial vaginosis, thrush or urinary infections. The protection against pathogenic germs occurs in many different ways: The lactobacilli in the vaginal flora metabolise glycogen into lactic acid (which is why these bacteria are also known as “lactic acid bacteria”). This process is important for maintaining an acidic pH between 3,8 and 4,4 within the vagina and creates an environment which prevents the growth of pathogenic germs. Furthermore, harmful microorganisms are kept in check with hydrogen peroxide, which is also produced by special lactobacilli.

A protective shield in the genital area

An impaired vaginal flora – a cause of recurring infections 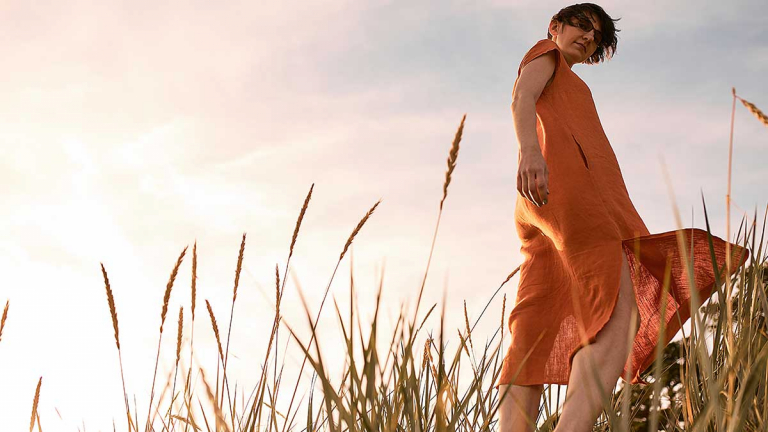 Usually, bacterial infections within the genital area are only treated with antibiotics. However, this kills off helpful microorganisms again and again and severely damages the protective shield in the genital area. It should, therefore, be no surprise that countless women suffer from recurring complaints in the genital area: 60% of all women that are diagnosed with bacterial vaginosis suffer from the same symptoms again at least six months later. Urinary tract infections (“bladder infections”) come back in a quarter of all women and often develop into chronic diseases.

A healthy vaginal microbiome mainly consists of bacteria from the lactobacilli species. These bacteria act as an important protective shield against vaginal disturbances and infections.

Pathogenic germs are exceptionally creative when it comes to their own survival: If the vaginal flora is out of balance, certain areas of the vagina could be covered by a so-called biofilm. This thin layer of mucous, which is produced by pathogenic germs, houses large concentrations of pathogens and protects them against the body’s immune system as well as against antibiotics. As a result, such a biofilm enables the resurgence of vaginal infections. There are two types of bacteria responsible for the recurrence of bladder infections: Escherichia coli and Gardnerella vaginalis. The former reaches the urinary tract from the intestines via the vagina and settles down within the wall of the bladder. They are hidden so well, that neither antibiotics nor the body’s own defence systems can find or attack them. Once Gardnerella joins the party, the E. coli bacteria are reactivated and cause a new urinary infection.

One research group at the University Vienna began developing a mixture of several lactobacilli species to naturally – via the intestines – and sustainably colonise the vagina: The natural passage through the intestines creates a warehouse in the rectum which acts as a reservoir and source for the colonisation of the vagina.  Starting with 127 lactobacilli isolates from the vaginas of healthy women, the gynaecologists conducted a step by step selection process. In the end, four special lactobacilli species were chosen. They fulfilled all quality criteria and had a verifiable impact on the health of the female urinary tracts. The efficacy of the combination of these four bacteria species was analysed in various investigations and showed superior results.

The sustainable colonisation of the vaginal tract with lactic acid bacteria in such an innovative way was clearly demonstrated through a unique placebo-controlled study: The colonisation of an artificially formed vagina with lactic acid bacteria in transsexual patients was examined at the Medical University Vienna. The vaginal tissue of these women had no natural protective shield after the operation. As such, a dysbiotic vaginal microflora was soon present, a typical characteristic of bacterial vaginosis. The scientists noted a significant improvement of the vaginal flora within 7 days after the oral intake of the probiotic in 48,5% of the transsexual women. Whereas only 14,8% of the women showed positive colonisation in the placebo group.  The oral intake of a multispecies probiotic with four selected lactobacilli strains enabled a completely natural colonisation and effectively restored the healthy vaginal flora. This is a sustainable process because a fresh supply of lactobacilli is always available from the intestines when the need arises.

Bacterial vaginosis (BV) is the most common microbial disturbance of the vaginal environment, with around 10% of all women suffering from it (during pregnancy, it even rises to 22%). Symptoms occur again and again in about 30% of the affected women. Typical symptoms of BV that occur in roughly 50% of all patients include increased discharge, itchiness, pain in the genital area and lower abdomen, as well as pain during intercourse.
The cause of bacterial vaginosis is the overgrowth of pathogenic germs in the vaginal flora such as Gardnerella vaginalis. BV is primarily treated with oral or local antibiotics such as Metronidazole or Clindamycin – however, these are not recommended during the first trimester of pregnancy. Nevertheless, other adequate therapeutic alternatives are necessary because of the increased risk of BV during pregnancy. The previously mentioned biofilm is the main culprit for recurring bacterial vaginosis. For this reason, the effects of the newly developed and drinkable probiotic were examined on patients with BV in a placebo-controlled study.

All in all, the intake of the multispecies probiotic reduced the occurrence of recurring bacterial vaginosis and generally improved the composition of the vaginal microbiome.

All participating patients were treated with antibiotics, and either received the probiotic or an identical placebo at the same time. After a four-week intake, none of the patients in the probiotic group showed any signs of BV. The placebo group, on the other hand, still showed signs of BV in 38% of the women. All in all, the intake of the multispecies probiotic reduced the occurrence of recurring bacterial vaginosis and generally improved the composition of the vaginal microbiome. Because of its conclusive advantages, the oral intake of the probiotic is recommended when treating bacterial vaginosis.