Tips to boost your immune system

The winter season is the cold season. Your own medicine cabinet at home offers many helpful remedies against symptoms such as coughing, a runny nose and hoarseness. To prevent the onset of an infection, you should strengthen your immune system – preferably with exercise, healthy food and probiotics. 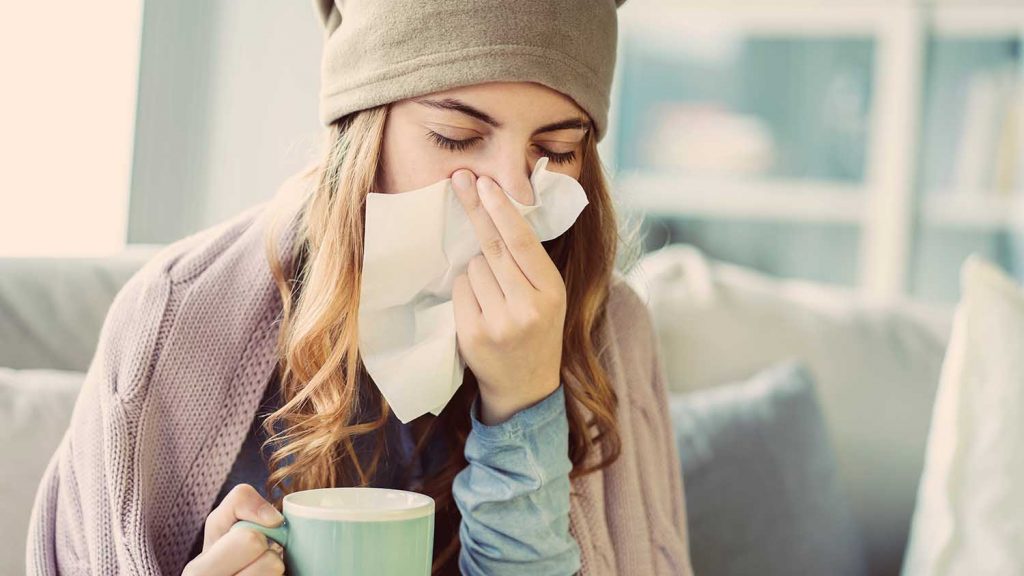 Many people are used to getting sick several times during autumn and winter. Whether a harmless cold or the real flu with high fever – such diseases are unpleasant and can keep you bedridden for a few days. However, many of these infections could have been avoided by strengthening the immune system in time.

The impact of the intestines on our immune system

The immune system is a complex cooperation between cells and proteins that protect our body against harmful microorganisms such as bacteria, viruses and fungi. Astoundingly, scientific evidence shows that 80% of the immune system lies in the intestines – it is, therefore, more than just a machine that processes food! The intestines and it’s trillions of inhabitants not only react towards the things we eat but also many other stimuli and irritants. One of these irritants is stress, and its duration can have a major effect on the immune system. Constant psychological strain (a.k.a. distress), e.g. through work at the end of the year, combined with a traditional fatty and sweet Christmas treats can upset our sensitive intestines. The aftermath not only includes complaints such as diarrhoea, constipation or an irritable colon but also a weakened immune system. This also has consequences for the entire organism. These include increased susceptibility to infections, the above mentioned intestinal complaints and a higher risk of developing severe diseases.

How to strengthen my immune system?

There are several easy options to strengthen the immune system and reduce the susceptibility towards infections:

This list of helpful tips, which help the immune system with its many tasks, could go on for a few more paragraphs. One point, however, deserves special attention: antibiotics.

Use antibiotics with cation

Antibiotics are a silver bullet against bacterial infections – and only bacterial infections! However, you should take them with caution. Pay special attention to the recommended dosage: If an antibiotic is prescribed for seven days, don’t stop taking it after four days, even if the symptoms improve. The carefree use of antibiotics causes increasing resistance towards antibiotics. In other words, bacteria are becoming less and less sensitive towards these drugs, and the consequences are fatal: In 2014, 25.000 people in the EU died because of antibiotic resistance and in 2018, it increased to 33.000.

Be a little more hesitant with the use of antibiotics in children. It is normal for infants under the age of two to contract up to eight infections per year since their immune system is still developing. Nevertheless, doctors are too quick to prescribe an antibiotic upon the pleas of worried parents. Out of ten infections, six to eight are treated with antibiotics, although only two infections are caused by bacteria. However, this doesn’t mean that you shouldn’t take every infection of your child seriously or delay the visit to the doctor. Instead, it is essential to find the cause since antibiotics are futile against viral infections.

To put a little less strain on the whole antibiotic situation, experts recommend the use of the above-mentioned probiotics as well as herbal medicines (so-called phytopharmaceuticals) with natural ingredients. For example, echinacea, blue wild indigo and thuja are perfect for stimulating the immune system. Many other plants such as aniseed, okra, ivy, eucalyptus, the South African geranium, mountain pine, primrose, ribwort and thyme help alleviate the acute symptoms of an infection. Ask your local pharmacy for advice and help.

Astoundingly, scientific evidence shows that 80% of the immune system lies in the intestines.