Why a healthy intestine is so important for pregnant women!

For this blogpost, our author, Lena, talked to new and expecting moms, as well as women who were planning on starting a family.

Pregnancy usually lasts 280 days, or 40 weeks, on average. Once the egg is fertilised, it takes 268 days until the baby is born and the lives of the new parents are turned upside down. A long time with many changes. Not only do the lives of the expecting parents change, but even the body of the expecting mother adapts to the new situation. These new circumstances bring many exciting and new experiences. Even before pregnancy is confirmed, many women already feel changes in their bodies. “Something was definitely different, but I couldn’t quite put a finger on it at the time“, explains an expecting mother when recounting the first weeks of her pregnancy. As soon as pregnancy was definitely confirmed, many of the interviewed women prepared for the upcoming 9 months. However, they were still surprised by what awaited them. Pregnancy is a true feat of strength by a woman’s body. By listening to their gut feeling, the women were able to conquer all obstacles and difficulties that came their way. In the end, it was their instinct that led the women to do the right things.

While women with unplanned pregnancies couldn’t prepare for what was to come, women with planned pregnancies were at the ready. The former were surprised by their growing tummy, whereas the latter prepared intensely and created the best possible conditions for an ideal pregnancy. Nevertheless, all women had to equally learn how to cope with the changes during pregnancy.

Many women who wanted to have children started talking folic acid before pregnancy. A lack of this vitamin generally has a negative effect on cell division, cell formation and growth. These processes are especially important for mother and child during pregnancy and the associated cell division. Mothers-to-be could develop anaemia, and the embryo is at a higher risk of developing neural tube defects. The neural tube develops on the 17th day after insemination and later evolves into the brain and spinal cord. The neural tube usually closes at the end of the 4th week of pregnancy. At this point in time, many women don’t even know that they’re pregnant yet! A lack of folic acid could compromise or even prevent the closure of the neural tube. This could lead to malformations – the most common being Spina Bifida (better known as an open back) or even a malformation of the brain. At its worst, the survival of the embryo and the mother could be at stake.

All women with planned pregnancies were, therefore, better prepared mentally and took folic acid supplements. Furthermore, these women also knew that a strong intestine played a decisive role in a “pleasant” pregnancy.

Click here to read more about the connection between infertility and the vaginal flora.

The intestines and its role during pregnancy 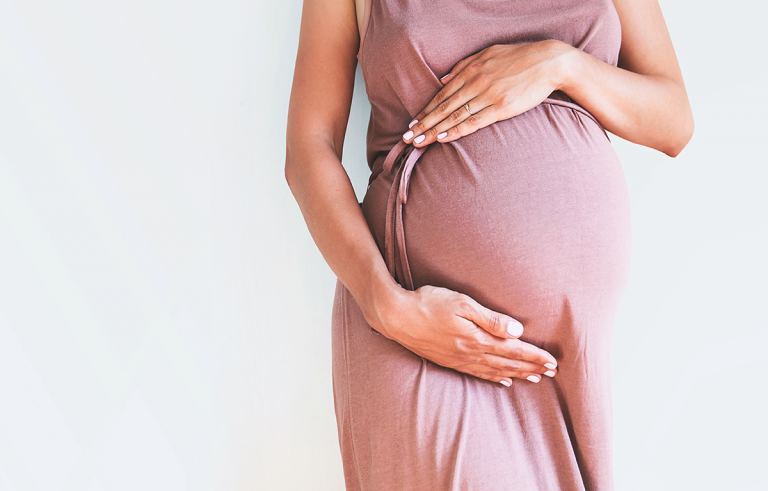 The interviewed new moms all reported digestive problems during pregnancy. Nothing surprising, since the majority of pregnancies include this common side effect. During early pregnancy (the period between insemination and a positive pregnancy test or latest until the 12th week of pregnancy), progesterone is released to protect the fertilised egg and to maintain the pregnancy. However, progesterone affects the intestines, making it slow and sluggish. The end result being constipation.

“At the beginning of my pregnancy, I only wanted to eat green apples!”

Women with a strong wish to have children hoped that an egg was implanted if they had any sign of constipation during their cycle. However, no one should underestimate constipation since the increased pressure while pressing could lead to the development of haemorrhoids. Even intense pressing during birth can cause some women to suffer from haemorrhoids afterwards. During the progression of pregnancy and the associated growth of the child, the intestines are put under even more pressure towards the end of pregnancy. The weight of the unborn child is pressed against the intestines and slows digestion. Constipation being the consequence yet again, as the food stays in the intestines even longer. This also leads to more gas in the intestines and bloating. Expecting mothers often report about uncontrollable flatulence and a very unpleasant accompanying smell.

“Sometimes I had to leave the room after passing wind without wanting to“, confesses one new mother. Some women even explained how they avoided social contacts during this time. Nevertheless, all the women found it amusing and saw is as a good sign that their intestines were working perfectly.

“About 8-6 weeks before birth, I lost my sweet tooth. I couldn’t stand chocolate, cake or any other sweets.”

Constipation often occurs after a change in diet. Many women report this change as either being conscious, as well as unconscious. On the one hand, women tried to maintain a healthy and balanced diet by consuming many vitamins in the form of fruits and veggies, as well as putting plenty of fibre-rich foods on the menu. Yet, many odd food combos also landed on their plates.

“I can remember eating strawberry ice-cream with tabasco sauce. In hindsight, it probably wouldn’t have won any food awards, but I loved it. Sadly though, my tummy always complained afterwards. My intestines probably didn’t enjoy that combination.”, explains one young mother about her unusual eating habits during pregnancy.”

As mentioned above, a change of circumstances can be a big challenge for the intestines. Once pregnancy begins, not only do the hormonal changes put the intestines under strain, but also all the exciting cravings that many women have. The questioned women often reported having a magical attraction towards foods rich in iron. Pistachios became their favourite snack, and many developed a craving for red meat that they hadn’t had before.

Since the baby needs plenty of iron while in the womb and the mother-to-be produces more blood to supply the uterus, the iron requirements of pregnant women rise well above normal levels. For this reason, many of the interviewed women took iron supplements during pregnancy. Especially those women who already had low iron levels beforehand. They need these iron supplements as their iron demand increases nine-fold towards the end of pregnancy.

However, the intake of iron supplements makes the intestines slow and sluggish. That is why women should favour iron-rich foods during pregnancy since they also contribute towards a healthy intestinal flora. To meet your daily iron requirements and still keep your intestines active, try some of these tips:

Unfortunately, pregnancy also has an ugly side. Even though many changes increase the anticipation towards the birth of the baby – like the ever-growing tummy – some changes can also cause troublesome side effects. Many expecting mothers report battling against continuous fungal infections: “As soon as I thought the infection was over, the next one was already around the corner,” tells one of the women. The vaginal flora is made up of various lactobacilli which coexist in a fragile balance. When this balance starts to tip, e.g. through hormonal changes during pregnancy, the protective function can wain and allow pathogenic bacteria and fungi to multiply, which can lead to unpleasant infections.

Every pregnancy is different and poses various challenges for the mothers-to-be. Within the growing tummy of the mother, a gut feeling settles in next to the growing baby. A gut feeling that helps women on their journey through pregnancy.

Dipl.-Ing. Anna-Lena Kollos, MA (a.k.a Lela) began her education as an athletics coach after her studies (Biotechnology, Food Technology and Public Affairs), completing all the courses with distinction by autumn 2019. Thanks to her work as a personal trainer and communication consultant with a focus on health-related topics, she closely analyses her gut feeling. As such, she focuses on a holistic and long-term approach, which is necessary to achieve her individual goals – in training, as well as communication. Lela has paid close attention to her gut feeling for many years and has trusted it on many occasions. Because of her diverse education and experiences, the personal trainer can rely on her vast Know-How.