Going to the movies, an hour at the gym or spending the evening at a restaurant can be a huge burden for people with Irritable Bowel Syndrome. The constant fear of the intestines overreacting significantly hampers the person’s quality of life. The affected become withdrawn because they feel unwell or can’t even leave their homes because of pain. The everyday life of a person with IBS is very limited and is also a topic that our society likes to avoid.

What is irritable bowel syndrome (IBS)?

IBS is a disease of the digestive tract with typical symptoms such as stomach pains, constipation, diarrhoea and flatulence. This functional disorder of the intestines causes cramps in the abdomen with varying intensity and affects each person differently. The stomach pains also occur frequently together with bowel movements. Sometimes defecation can alleviate symptoms, but also make them worse. Many patients with IBS often report not being able to completely empty their intestines. They go to the toilet, but can’t or only partially relieve themselves. Moreover, irregular bowel movements are also a typical symptom. The affected tend to switch between diarrhoea and constipation.

Besides this list of symptoms, many affected also have a bloated stomach, a feeling of fullness, severe flatulence and have to belch frequently. Additionally, extra-abdominal symptoms can occur such as fatigue, headaches, exhaustion and a subdued mood. Patients with IBS frequently report that stress and certain foods aggravate their symptoms, something that could help develop a targeted treatment.

What are the causes of IBS? 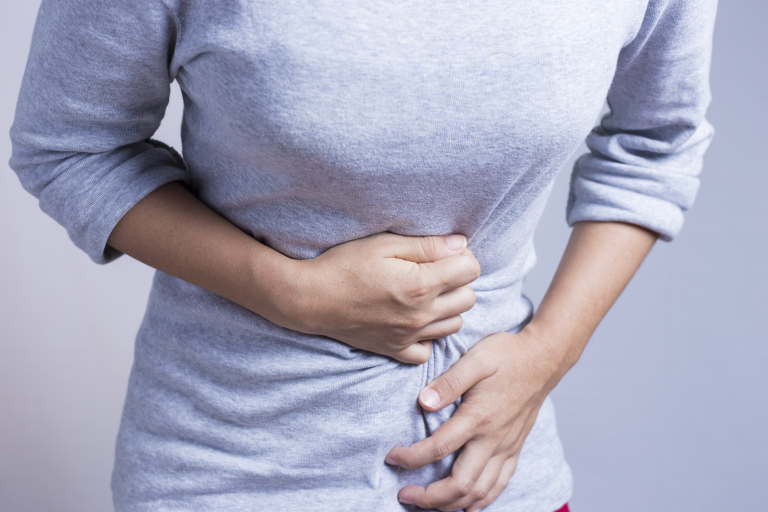 There are no tangibles causes that can be attributed to IBS. Instead, it is the interaction between several factors that trigger IBS. Each of the affected can develop different complaints. However, scientists assume that lifestyle and genetics play an important role. An unhealthy lifestyle, i.e. sugar and fat-rich diets, a lack of exercise, too much alcohol, and even stress can trigger an irritable bowel over time. Many people who already have an irritable bowel react and develop symptoms towards certain foods. To some extent, carbohydrates such as lactose and fructose cause more problems for the affected. Patients often also reported an intolerance towards gluten, the sticky protein in wheat, even though they don’t have coeliac’s disease.

The intestinal brain – an interplay between the brain and the gut

The so called brain-gut-axis forms a constant exchange of information between the intestinal nervous system and the central nervous system. Scientists hypothesise that the intestinal nervous system is overactive in patients with IBS. On the one hand, this could lead to complaints, and on the other hand, influence the psyche. Studies have shown that an irritable bowel is often associated with depression, chronic stress, psychological trauma and anxiety disorders. Many of the affected feel as though they’re not taken seriously. However, their symptoms aren’t a figment of their imagination as they are triggered or alleviated by the interplay between these two complex nervous systems.

How is IBS diagnosed?

It isn’t easy for doctors to diagnose “IBS”. This is because symptoms vary from patient to patient, and these symptoms also change over time. There is also no test that doctors can use to prove the presence of IBS. Initially, doctors talk with their patients and determine their symptoms as precisely as possible. Here, doctors try to figure out where the complaints come from and how long the patients have had them. Physicians also use this first consultation to exclude other possible diseases. Depending on the doctor’s initial assumptions, there are several methods to exclude various diseases.

If these tests show no signs of other diseases, then the diagnosis of Irritable Bowel Syndrome can be made.

Studies show that people with Irritable Bowel Syndrome have a negatively altered intestinal flora in comparison with healthy individuals. These changes can be the result of antibiotics, gastrointestinal infections and chronics stress. Scientists also discovered that some patients had too many bacteria in their small intestines when there shouldn’t be any in the first place. The use of high-quality probiotics has a verifiable positive impact on the restoration of the intestinal flora. Probiotics are only comprised of bacterial strains that are naturally found in the human body and that support health-promoting bacteria. Lactobacilli and bifidobacteria are especially effective in ousting pathogenic germs from the intestines. A probiotic that contains both of these species is perfect for sustainably rebuilding the intestinal flora.

In principle, patients with IBS can lead a life with very few symptoms. Of course, this depends on the sensitivity of the intestines, but symptoms can be alleviated through a change in diet, for example. It is also recommended to take a break and listen to your body. Stress is a huge factor that triggers an irritable bowel, which is why breaks are so important.