a channel of communication

For a long time, we assumed that the intestines were just a digestive organ without any other purpose. Nowadays, we know that this view drastically underestimated the potential of the intestines as it also protects us from diseases. The nervous connections between the intestines and our brains, the so-called brain-gut-axis, have been the focus of research for several years.

The brain-gut-axis is the intimate connection and intense exchange of information between the intestines and the brain in both directions. The nervous system acts as a central element in the communication between the intestines and the brain. The digestive tract contains roughly 100 million nerves – four to five times more than in the spinal cord – which makes it our second brain. This so-called enteric nervous system or “intestinal brain” regulates, in cooperation with our “proper brain”, intestinal motility (movement in the intestinal muscles), blood flow in the digestive tract and the immunological function of the intestines. Even hormones, a.k.a. neurotransmitters, play an important role in the brain-gut-axis: More than 20 hormones are produced in the intestines, including a large portion of serotonin – the neurotransmitter responsible for happiness and cheerfulness. Moreover, serotonin is the precursor molecule of the sleeping hormone melatonin, which is responsible for getting a good nights sleep.

A central component of this axis is our intestinal flora or more precisely, the various metabolic products that are produced by our helpful intestinal bacteria. They produce, among others, vital amino acids (such as tryptophan which is needed for the production of serotonin) and short-chain fatty acids (e.g. butyrate) that influence our emotions, ability to concentrate and stress levels. At the same time, butyrate is also an important source of energy for certain cells in the brain, namely the microglia cells: These cleansers metabolise unwanted particles and clean the brain. Microglia cells need butyrate to mature and work properly – and if there are too little helpful intestinal bacteria to produce enough butyrate, then the microglia cells have too little energy to clean out the brain. Ultimately, harmful substances accumulate in the brain.

How does stress affect the intestines?

The brain releases neurotransmitters and stress hormones in stressful situations that put the entire body on alert. Constant stress can cause the connections between intestinal cells (Tight Junctions) to dissolve through various “stress effector molecules” (e.g. free radicals) which could lead to an intestine full of holes (Leaky Gut). The mechanisms that cause increased permeability of the intestinal mucosa through stress are still largely unknown. Nevertheless, this increased permeability creates many problems in the intestines since unwanted toxins and pathogens can suddenly enter through the intestinal wall. We now know that all signal pathways in the body are influenced by the intestinal flora. Just like the immune system, our metabolism and mental reactions.

“The digestion is the mirror of the soul.”

Chronic stress affects certain regions of the brain in a way that disturbs our emotional balance. In extreme cases, this could lead to the development of anxiety disorders and depressions. That is also why depression is included among stress-associated diseases. Many regions of the brain and neurotransmitters are affected by depression: Serotonin, noradrenaline, glutamate and dozens of other hormones. Melatonin plays a pivotal role in our day and night rhythm, a rhythm that is easily deranged through depression, stress or emotional imbalance. The University of Innsbruck was able to show how permanent stress could lead to extensive inflammations in the intestines, which had enormous consequences for the intestinal barrier. The intestinal bacteria die off, the membrane proteins of the “Tight Junctions” dissolve, and toxins and allergens enter the bloodstream. Researchers even assume that these “silent inflammations” could be a cause of Alzheimer’s and dementia. 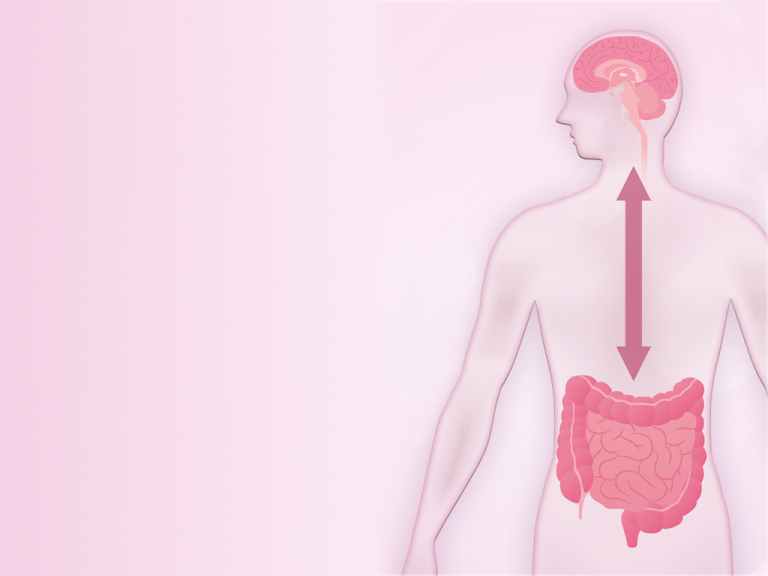 Specific probiotics have already been developed that have an anti-inflammatory effect on the intestinal mucosa and therefore positively influence the brain-gut-axis. Several placebo-controlled studies at the Medical University Graz have also proven the positive effect of specially developed, anti-inflammatory multispecies probiotics in healthy and mentally ill patients. This probiotic is specifically suited for influencing depression, gastrointestinal symptoms and sleeping disorders thanks to its beneficial effects on the vegetative nervous system, the brain-gut-axis and its stabilisation of the intestinal barrier.

Psychiatric disorders – how do the intestines play a role?

The number of psychiatric diseases is constantly rising due to our fast-moving and hectic lifestyles. Roughly 5% of all people in german-speaking countries suffer from bipolar disorders throughout their lives. More than half of these people already develop symptoms before their 18th birthday. Many also report side effects, including memory loss and concentration disorders during their phases of depression. Even though the intake of psychotropic drugs alleviates symptoms, it doesn’t improve cognitive function. This shows how difficult it is to get back into normal life despite new mental stability, which is detrimental towards the self-esteem of the affected. Several studies have already shown that the intestinal flora of people with mental diseases differs largely from that of healthy people. The intake of high-quality probiotics positively influences the bacterial colonisation of the intestines so that the good bacteria can propagate and complete their tasks. There are specially developed probiotics that have a targeted impact on the brain-gut-axis and therefore positively influence cognitive performances – without unwanted side effects. Furthermore, there is also a proven connection between diet and mood. Current studies show that adolescents who indulge in fast food and sweets too often are more likely to suffer from a depressive mood. The quality of our diet also plays a big role in our physical and mental wellbeing. A bad diet isn’t necessarily the cause of psychiatric disorders, but it has been an underestimated factor until now. Many mental diseases are difficult to treat effectively since not all the relevant causes and factors have been discovered. Since not all patients respond to conventional treatments methods, many scientists are now relying on research of the intestinal flora. The importance of a healthy intestinal flora for our bodies has already been validated through so-called faecal microbiota transplants. Patients who received faecal microbiota transplantations with healthy intestinal flora showed significant success against infections with multi-resistant germs.