The intestines, lungs, skin, brain and reproductive organs don’t have a lot in common at first glance. However, once we take a closer look, we realise that the tiny bacteria that inhabit our bodies have a huge impact on every single one of our cells and act as a protective battalion in many areas. But how is this possible, and how did we even get “our” bacteria? 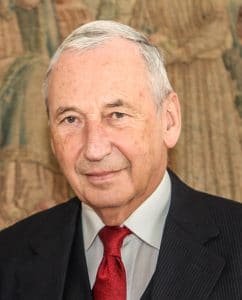 Decoding the human genome, the blueprint of human life, was a medical breakthrough back in 2003. Shortly afterwards, once we started decoding the epigenome, we realised that our genetic material is much more complicated than we originally thought. Epigenetics basically regulate our genes and determine when a certain genetic code is activated or deactivated. And as if the genome and epigenome weren’t enough, the discovery of the metagenome revealed that there was a third code of life within our bodies: The genomic information of all the helpful bacteria that inhabit our bodies, our so-called microbiome. The majority of our 100 trillion inhabitants live within the intestines. Nevertheless, countless symbionts can also be found on our skin and mucosa, all of which promote our daily wellbeing.

Univ.-Prof. DDr. Johannes Huber, leading gynaecologist and hormonal expert, knows how important the microbiome is for female health and human health in general. “The primary role of bacteria began long before the evolution of humanity, that is to say 40 million years ago, thanks to the following evolutionary milestone: New life emerged directly within the maternal body and not only through the laying and incubation of eggs. This evolutionary leap was all thanks to the metagenome. In fact, bacteria incorporated (Note: incorporation is the deliberate or unintentional intake of substances, objects or microorganisms) themselves within the egg cell and triggered the development of the placenta.”, explained the expert at a recent press conference in Vienna.

The discovery of the metagenome revealed that there was a third code of life within our bodies: The genomic information of our microbiome.

The bacterial metagenome is an ancient heirloom of evolution, yet not completely understood by science. Even one of the biggest discoveries of bacteriology is directly related to our reproduction. Theodor Escherich, a famous paediatrician, scientist and researcher at the Universities of Graz and Vienna, discovered in 1886 that childrens’ intestines are sterile after birth and are inhabited rather quickly by a certain germ. This germ was named “Escherichia coli”, in honour of its discoverer.

Whoever thinks that the same little “helpers” bustle about within each and every one of us is in for a rude awakening: From the roughly 36.000 currently known species of bacteria, 500-1.000 different species live within our bodies – with each composition as unique as a fingerprint. And these bacteria don’t only stick to us: Our homes reflect our bacterial colonisation, especially our doorknobs. This microbial fingerprint is, for example, responsible for the different reactions that people have towards various drugs. Depending on which bacteria are found within the intestines, certain antibiotics and other oral drugs are resorbed in different amounts. Prof. Huber: “This explains why, for example, some women have no problems with the pill, while others don’t tolerate the same pill at all”. Our small inhabitants are mainly responsible for our health in many different ways – which is why it is so essential that we take care of our microbiome.

The majority of the 2 kilogrammes of bacteria that inhabit us can be found in the intestines, yet the microbiome also plays a significant role for our health in other organs: Our skin is also bustling with billions of helpful bacteria. And just like a map, we can plot where which microorganisms can be found across our bodies. Now, some might find the thought of life on and in us as disgusting and are already thinking about buying some antibacterial soap. However, this could do more harm than good.

Just like our friends in the intestines, the bacteria on the skin are essential for the health of this organ. In the absence of these bacteria, dermatological diseases such as allergies, rosacea, and chronic skin infections can develop. The body’s bacteria keep foreign germs at bay like a strong battalion, however, if this defensive line is decimated or missing, unwanted microorganisms can quickly spread and cause many problems. By the way, our microbiome isn’t only found on the skin and mucosa (mouth, nose, intestines, genitalia…), but also in an organ that we thought was aseptic (i.e., free of germs) until recently: Our lungs play a central role in the development and severity of Asthma.

The intestinal bacteria are becoming increasingly more important in gynaecology. The connection may not be clear at first, but more and more studies clearly show that the intestinal microbiome plays a central role in the processing of the most important female hormone, oestrogen. These results even fascinate experienced doctors and researchers such as Prof. Huber: “The intestinal flora also determines what is done with the oestrogen from the ovaries and how much free oestrogen is available within the body.”

This isn’t only relevant for the efficacy of hormonal therapy, but also for understanding the development of breast cancer: A noteworthy study by the WHI (Women’s Health Initiative) showed that oestrogen is the central cause for this disease – but now the intestines also have to be taken into consideration as it determines the fate of oestrogen in the body.

One further aspect of the microbiome is becoming increasingly important within medicine – namely its impact on our weight. Everyone has that one friend that can eat whatever they want and not gain weight despite a lack of exercise. And then there are others that are the exact opposite: Plenty of sport and a balanced diet are a part of their daily routine – yet just the sight of food is enough to increase their hip circumference and pile the numbers on the scale. This is also determined by our gut bacteria, especially the Firmicutes and Bacteroidetes, 2 groups that are responsible for calory absorption in the intestines. Back when there were no grocery stores, ready-made foods, nor an excess of foods, our bodies often had to extract enough energy for a whole week from just 2 meagre meals to ensure the survival of our species. Firmicute bacteria, a.k.a. “calory collectors”, were essential over 100.000 years ago but an excess of these bacteria in the intestines are a curse in our modern society. These bacteria are capable of “squeezing” as much energy out of a cucumber as there is usually in a schnitzel. Strictly counting calories often doesn’t help overweight individuals if they have more Firmicutes than Bacteroidetes, which figuratively “hunt down” sugar and encapsulate it to be transported out of the intestines.

The bacterial flora of a mother

The colonisation of the human body with microorganisms largely determines the life-long strength of our individual immune systems. “In this case, birth and even pregnancy are especially significant. During birth, the new-borns come into contact with the bacterial flora of the mother and begin building their own immune system at that moment.”, explains Prof. Huber. A determining factor is whether the mother has a healthy and balanced bacterial flora, especially in her intestines. “In the intestines?” many will wonder, and rightly so. However, the intestines are basically a reservoir of bacteria for the colonisation of the vagina: If the intestinal flora is healthy and rich in vital Lactobacilli, then so is the vaginal flora. During the passage through the birth canal, the child comes into close contact with the maternal bacterial flora. This forms the foundation for the colonisation of the child’s intestines and the basis of the development of the child’s immune system. However, only new-borns born to natural births can profit from this colonisation – not children born via caesarean section. The “C-section” is becoming increasingly popular, especially since children within the womb are getting bigger and bigger (head and shoulder circumference) and the female pelvis can’t keep up with this rapid evolution. Prof. Huber: “This is a huge topic in gynaecology at the moment. How can we provide the new-borns with intestinal and vaginal bacteria from the mother after birth via C-section?”

The vaginal flora: a protective shield

The female vaginal flora and its countless lactobacilli aren’t only important during birth. In addition, they act as a “protective shield” throughout every woman’s life. Prof. Huber: “Stress, hormonal changes (during pregnancy, menopause or hormonal contraception), antibiotics, smoking, sugary foods and many other factors can make this protective shield “brittle”, resulting in a so-called “vaginal dysbiosis” or imbalance.” The consequence: Harmful bacteria and fungi propagate and cause infections throughout the entire urogenital tract. 25-30% of women suffer from bacterial vaginosis, countless from thrush and vaginal dryness, and even recurring bladder infections are quite common. These infections (see info box) often flare up again and again. Local vaginal therapy usually doesn’t bring the desired results. One of the reasons being the continuous immigration of pathogenic intestinal bacteria from the intestines to the vagina. If left untreated or due to a lack of therapeutic success, these inflammations can spread to the bladder and ovaries. These vaginal infections are especially dangerous for mother and child during pregnancy. Possible consequences range from premature rupture of the membranes to premature contractions and even premature delivery.

Studies at the women’s clinic at the AKH Vienna recently revealed a new concept in treating an imbalanced vaginal flora. Under the assumption that the intestinal flora is the basis for a healthy vaginal flora, researchers examined whether the oral intake of selected lactobacilli had an effect on the colonisation of the vagina. They were actually able to prove that the ingested bacteria could sustainably settle down in the vaginal tract. “The oral use of probiotics has provided the field of gynaecology with a completely new and sustainable approach to treating vaginal dysbiosis”, exclaims Prof. Huber.

*Univ.-Prof. DDr. Johannes Huber is an attending gynaecologist and a hormone specialist in Vienna.

Symptoms of common infections within the female urogenital tract

A typical symptom of this bacterial infection is the increased discharge of a thin, white-grey liquid that smells like fish. Furthermore, itchiness and pain can occur in the vaginal area and lower abdomen and even cause discomfort during intercourse. Roughly half of the affected have none of the above-mentioned symptoms during bacterial vaginosis. The most common cause is the germ Gardnerella vaginalis.

This infection is caused by the increase in certain fungi (especially Candida albicans) and includes symptoms such as itchiness, vaginal redness, soreness, burning and pain during intercourse and urination.

This is the term for infections throughout the urinary system: These not only affect the urethra and bladder, but also the ureter, kidneys and can even spread into the bloodstream. Depending on how high the infection “climbed”, different symptoms can arise: If the urethra is affected, pain during urination and itchiness can occur. The same can be said for the bladder infection and can also include reduced urinary flow, bloody urine and an increased desire to urinate. An acute inflammation of the kidneys presents itself through flank pain, fever and nausea.