Like all mammals, cats and dogs have a microbiome. However, research into the animal intestinal flora – in contrast to that of humans – is still in its infancy. Nevertheless, scientific research already shows clear connections between a disturbed animal intestinal flora (= dysbiosis) and the development of various clinical pictures, such as diarrhoea, chronic inflammatory bowel diseases or dermatitis. Does this sound familiar to you? No wonder, because the human and animal microbiome are similar in many areas. This leads to the conclusion that animals can develop similar symptoms as humans due to a disturbed intestinal flora – and the therapy with pro- and prebiotics in cats and dogs makes an important contribution to animal health.

If you look at the rough composition of the intestinal flora, you can see that the same large classes of bacteria are represented for the most part in humans and animals, and in similar proportions. “What is interesting in this context is that dogs take on considerably more bacteria from their dog owners than humans do from their dogs,” explains veterinarian Dr. Nina Machac. The reason for this: due to domestication, many cats and dogs consume similar or even the same food as their owners, for example if they are fed food with a high carbohydrate content or are regularly fed from the table. Food intake has a central influence on the development of the microbiome, and this explains the similarity of the gut flora of cats and dogs to that of humans. Incidentally, the similarity of lifestyle between pet and owner has another effect: diseases of humans and animals are also similar, and so obesity, allergies (especially of the skin), diabetes and also cancer are increasingly finding their way into veterinary practices.

Why is my pet’s gut flora important? 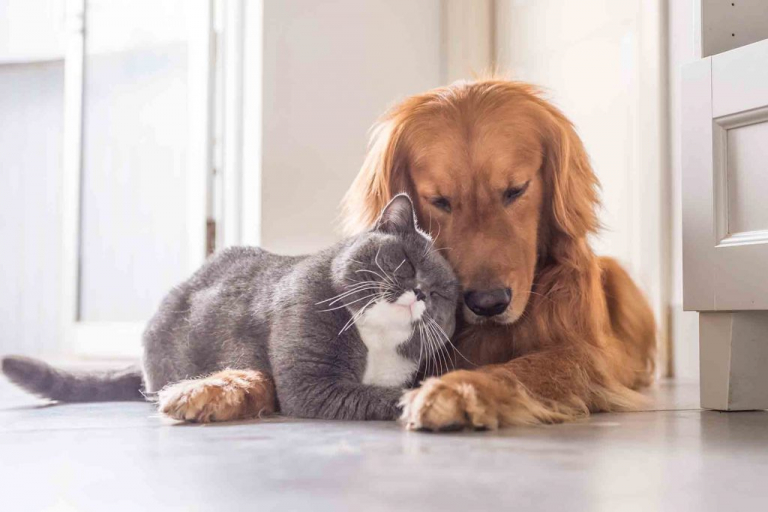 The influence of the intestinal flora on the health of mammals is still greatly underestimated. In addition to food utilisation and the excretion of indigestible residues, the intestine also plays a fundamental role in the immune system of animals. “Toxins, germs, viruses, fungi and parasites also pass through the intestine with the food, whereby animals are exposed to a significantly higher load of undesirable substances compared to humans – just think of the interesting things dogs stick their noses into and what your cat brings back from going outdoors,” Dr. Machac knows from practical experience. To protect the organism, the intestinal flora forms an immunologically effective barrier against foreign substances. This is made visible by the fact that 50-80% (depending on the species) of the body’s immune cells are located there. The enormous surface area of the intestinal mucosa, which far exceeds that of the lungs and skin, contains three times more plasma cells than bone marrow, spleen and lymph nodes combined, making it the largest immunological organ in the body..

Due to the intensive contact with various foreign substances, the intestine is thus the most important factor for the immune system of mammals. The intestine is supported in this enormous defence by trillions of bacteria that are found in the intestinal lumen or which adhere to the intestinal mucosa. Just like in humans, this microbial mass produces vitamins, essential amino acids, hormones, enzymes, antibiotically active substances and short-chain fatty acids, among other things, which serve to supply the cells of the intestinal mucosa. In contrast to humans, where a relevant part of the daily required energy is produced by the microbiome, dogs and cats do not depend on energy production in the intestine.

What can influence my pet’s gut flora?

Modern laboratory tests have shown that a disturbed intestinal flora is largely responsible for various disorders and diseases: In addition to digestive problems, leaky gut syndrome and (chronic) inflammatory bowel diseases, allergies such as dermatitis and intolerances also originate here.

Not only the composition of the intestinal flora of humans and animals is similar to a great extent, but also those factors that negatively influence the microbiome and significantly disturb its composition: “In particular, stress, medications such as antibiotics or feed changes lead to massive changes in the animal microbiome – and this often manifests itself in acute diarrhoea,” the veterinarian knows. But feeding mistakes (cold, spoiled, high-sugar or high-fat food) also often lead to digestive problems, as do infections with parasites, viruses or harmful bacteria, which have an easy time settling in the intestines, especially if the intestinal flora is disturbed. Chronic diarrhoea can also often be associated with a disturbed composition of the animal microbiome and indicate diseases such as inflammatory bowel diseases, an irritable bowel that is very susceptible to disturbances, feed intolerances, tumours or a deficiency of digestive enzymes. Most diarrhoea is harmless and subsides after a short period of time, but there are some warning signs when a visit to the vet is strongly advised.

Should I give my cat or dog probiotics?

Probiotics are a sensible measure without undesirable effects for various diseases of the intestine and can be used both for therapy and prophylaxis. This is not only evident from the great similarities between the human and animal microbiome, but is also clearly confirmed by numerous studies. It is also important for animals to select probiotic bacterial strains whose use is demonstrably safe and whose health-promoting effects are known beyond doubt. One of these bacterial strains is Enterococcus faecium NCIMB 10415: This probiotic strain belongs to those lactic acid bacteria that enable the development of a healthy microbiome. Due to the similarity of the human and animal microbiome, it is possible to use this high-quality bacterial strain in humans and animals. Studies with Enterococcus faecium NCIMB 10415 confirm its positive properties: The pH value in the intestine is lowered (thus creating an ideal environment for the entire health-promoting intestinal flora) and pathogenic germs (e.g. enterotoxic Escherichia coli (ETEC), salmonella, shigella and clostridia) are drastically hindered in their reproduction. Studies also show a significant reduction in diarrhoea and a faster resolution of symptoms.

Intestinal parasites such as giardia are a common trigger for diarrhoea in dogs and cats.

Another bacterial strain with enormous relevance for animals is Lactobacillus acidophilus CECT 4529: It is one of the most important commensal intestinal bacteria found in the natural intestinal flora of cats and dogs. Its resistance to gastric and bile acids and its ability to adhere to the intestinal mucosa and produce antimicrobial substances are the basis for its benefits for animal health. Studies also demonstrate its ability to balance dysbiotic gut flora and displace germs. This is particularly evident in an improvement in faecal consistency, due to a reduction in the water content of excreta. Thus, its use in diarrhoea (also preventively in stress situations or when antibiotics are administered) is recommended for cats and dogs.

In addition, improved immune response, lowering of serum cholesterol, improvement of lactose metabolism and reduction of infection rates have been demonstrated in various feeding studies.

These results are summarised in several comprehensive reviews that reflect the current state of knowledge about probiotics in dogs and cats: “Just like in humans, specially selected probiotic bacterial strains not only have an effect on the digestive tract, but rather the entire organism benefits: studies have shown a positive influence on the immune system, metabolism and inflammation for probiotics in animals,” summarises Dr. Machac.

As in humans, the majority of the animal microbiome consists of anaerobic gut bacteria (these cannot tolerate oxygen), which cannot be fed to the organism, but which are “fed” with specific prebiotics: Prebiotics are indigestible carbohydrate compounds (better known as dietary fibres) that are available to the intestinal bacteria as an energy substrate. Specific dietary fibres specifically influence both the composition and the activity of the intestinal flora and stimulate the growth of certain probiotic bacteria species in the intestine. The fermentation of these dietary fibres by the intestinal bacteria produces, among other things, short-chain fatty acids, which play a direct role in immune defence: This is because short-chain fatty acids stimulate the production of mucus. This important mucus layer lies protectively over the cells of the intestinal mucosa to prevent harmful substances and germs from entering the organism from the intestine.

Mannose oligosaccharides (MOS) are particularly suitable for animals: these belong to the complex carbohydrate compounds, serve important intestinal bacteria (such as lactobacilli or bifidobacteria) as food as well as an energy substrate and thus contribute to their proliferation. Studies also show that MOS have a positive effect on metabolism: for example, a significant reduction in total cholesterol and LDL cholesterol concentration has been demonstrated in dogs. Furthermore, MOS support the response of the immune system in animals.

Particularly noteworthy is the role of MOS in fighting pathogenic germs. It is important to know that different strains of Escherichia coli as well as Salmonella have a high affinity for MOS molecules – these germs virtually attract MOS. This blocks the docking sites on the membranes of these harmful invaders with which the pathogens would normally adhere to the intestinal wall. However, since the docking sites are already blocked with MOS, E. coli, salmonella and co. can no longer attach to the intestinal wall, but are simply excreted from the intestine.

The current state of studies on the animal microbiome shows that – similar to humans – the intestine is the centre of health and the intestinal flora can be stabilised or its composition clearly improved through the targeted use of pro- and prebiotics. Dr Machac sees this as an important approach for practice: “Probiotic bacteria in combination with prebiotic dietary fibres are a promising approach to treat animal ailments – both in the digestive tract and in the whole organism – naturally and safely.”

Diarrhoea is often self-limiting and subsides as soon as the trigger (whether incompatible food or a foreign germ) has been eliminated by the increased bowel movements. However, there are clear warning signs that point to a serious illness. If your pet has diarrhoea and it shows any of the following characteristics or behaviours, a visit to the vet is definitely required:

Food-associated diarrhoea can be due to a ‘true’ feed allergy or a feed intolerance – diarrhoea is often accompanied by vomiting, fatigue and skin symptoms. Feed intolerance is the most common cause of diarrhoea in pets, with a prevalence of up to 31%.

Diarrhoea in young animals occurs particularly frequently after suckling. The causes are multifactorial and are usually associated with change of location, separation from the mother as well as spontaneous change of feed (from mother’s milk to normal feed).

The germ Clostridium perfringens settles more in the animal intestine when the microbiome is disturbed (e.g. due to an antibiotic or previous damage to the intestine by a viral infection). Type A C. perfringens often produces toxins that are causative for the development of haemorrhagic gastroenteritis.