Everyone is familiar with stomach ache, diarrhoea, vomiting, nausea, fever – symptoms which can also occur with an upset stomach or a ‘stomach bug’ – however, patients with inflammatory bowel disease suffer more from them and often in bouts known as IBS flare ups.

What is IBS (inflammatory bowel disease)?

Crohn’s disease and colitis ulcerosa are the two best-known and most common forms of chronic inflammatory bowel disease, and differ mostly in the location of the inflammation. In Crohn’s disease (CD) the entire gastrointestinal tract can be affected, while in ulcerative colitis (UC) it is limited to the large intestine. Both diseases occur in bouts and are incurable, but they can be treated. In the acute phase during so-called inflammatory flares, mainstream medical treatment predominates. Complementary therapy with medicinal herbs and naturopathy has, however, proven helpful for many patients in the acute phase as well as during the symptom-free phase. The best foundation for all treatments is a healthy and stable gut flora to protect against bowel infections (to which IBD patients are particularly susceptible) and also to minimise renewed flares of the disease.

Which symptoms occur with IBD (Crohn’s disease and ulcerative colitis)?

The symptoms of IBD exhibit similarities but also differences. Similar typical symptoms are frequent extreme diarrhoea, which is accompanied by mucus and blood in the case of CU. Other symptoms are abdominal pains, nausea and vomiting, often occuring as a flare up. Flatulence, fever and increased inflammation markers in the blood are also typical for chronic inflammatory bowel diseases. In the case of Crohn’s disease (CD) in particular, patients often lose weight due to a loss of appetiteand a lack of important nutrients. Many UC patients additionally suffer from anaemia, as there is blood loss in the inflamed areas in the intestines. In addition, there are also issues outside the bowels in both conditions. Patients frequently suffer from joint problems. The bile ducts, skin and eyes can also be affected. In the case of long-lasting chronic inflammation of the bowels with frequent flares, the risk of bowel cancer also rises. The objective here is therefore to minimise the inflammation phases and the symptoms. 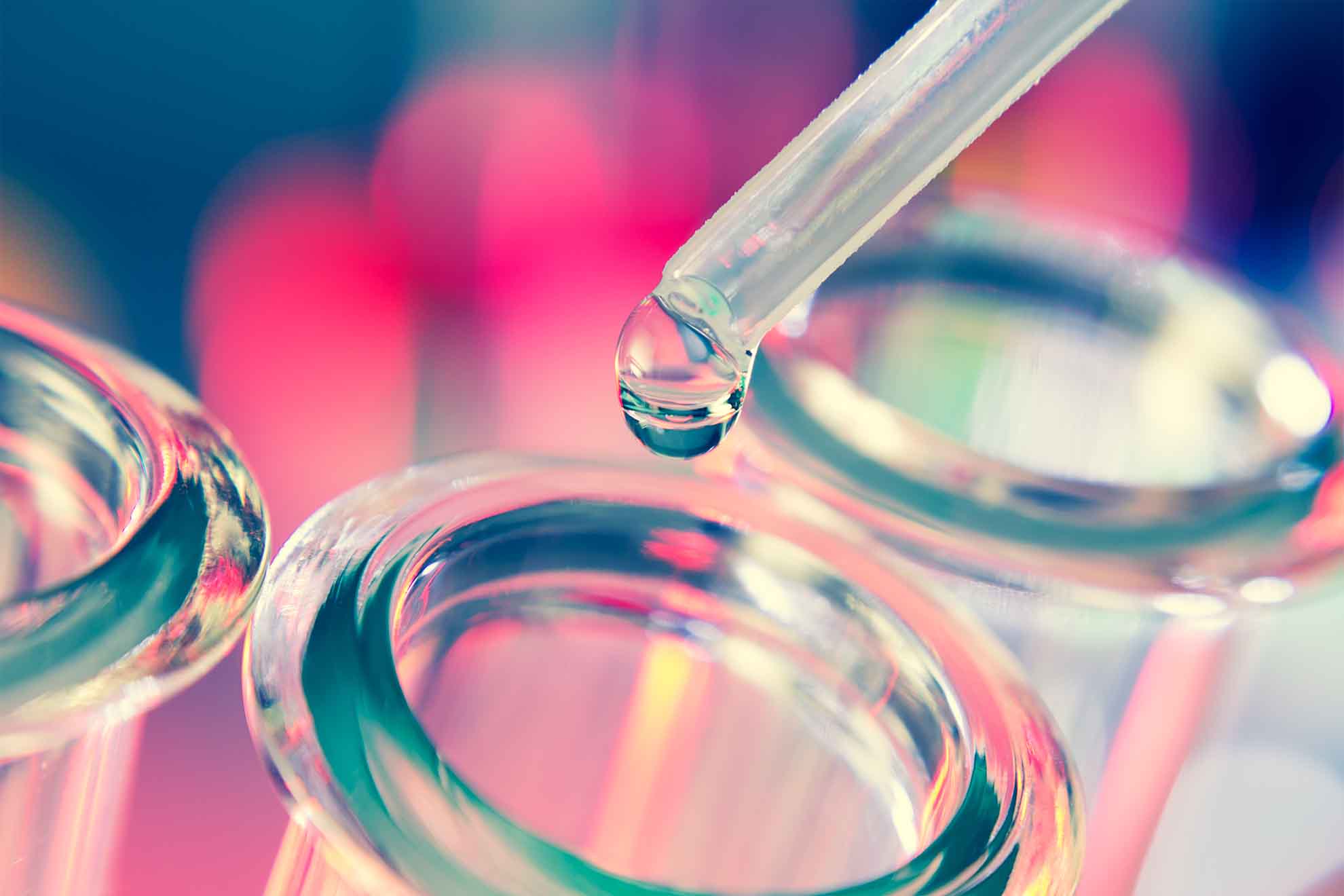 The Greek physician Hippocrates already stated in 300 BC that: „The intestine is the father of all misery.” Stool diagnostics based on classic methods and now also molecular genetic processes have confirmed this early assessment: Many diseases start within the gut and manifest themselves in changes of the intestinal flora.
Read more here

It is still not clear what causes Crohn’s disease and ulcerative colitis, and what is responsible for triggering them. Genetics play a role, albeit a smaller one in ulcerative colitis than in Crohn’s disease. There are more than 70 genes which are related to the occurrence of Crohn's disease. Environmental factors also play a significant role. For example, the probability of it occurring depends on the country a person lives in, and whether they live in a rural or urban area. The highest standards of hygiene tend to contribute towards triggering IBD. Having to deal with bacterial and viral infections from birth tends to protect the organism from IBD.

These different factors (mental, genetic, infectology-related and environmental, among others) lead to an increased permeability of the mucus membrane (leaky gut) and increasedimmune activity in the intestinal mucosa.

In the intestinal mucosa, neighbouring cells are connected by so-called tight junctions. They seal the cells in relation to others so that no foreign substances or pathogens can move between the cells. As long as this barrier is intact, the totality of the intestinal mucosa cells form a protective shield preventing the intrusion of external substances (including bacteria or toxins) from the bowels into the body. In IBD, and not just because of changes caused by inflammation, this barrier is leaky, i.e. the cells are no longer so tightly connected and pathogens and toxins can penetrate the mucosa more easily, leading to an immune reaction, inflammation.

In tissue samples of the intestinal mucosa of patients with IBD, increased immune activity can be established. An increased number of immune cells and their messenger substances (inflammation mediators such as interleukin and TNF (tumour necrosis factor) α) can be established. Autoimmune processes which destroy the intestinal mucosa are the result. Where this increased defensive reaction and this self-destructive inflammation come from and what they are possibly good for is still being intensively researched. The intestinal microbiome plays a significant role. The diversity of the bacteria forming the gut flora, which is important for a normal bowel function, has been pathologically changed and damaged in IBD patients. The gut bacteria can thus no longer fulfil their protective and defensive function.

How can IBD (Crohn's disease and ulcerative colitis) be diagnosed?

The diagnosis of an irritated bowel is made on the basis of a pattern of typical symptoms, a colonoscopy and imaging technology.  In individual cases, the doctor has to examine whether IBD is really present or whether it is another disease. Many infectious diseases also present symptoms such as diarrhoea, and intolerance of medication also results in similar complaints. Particularly in the case of older people, it is necessary to check whether poor circulation is not the cause of the symptoms. Thromboses (local blood clots) in the blood vessels of the bowels: ischaemic colitis (inflammation in the bowels caused by a lack of blood).

Every diagnosis begins with an thorough interview with a doctor about the patient’s medical history.

This is followed by a thorough examination. In order to differentiate between CD and UC and also to exclude possible infectious bowel diseases which exhibit similar symptoms to IBD, diagnosis always requires an examination of the entire digestive tract. Endoscopic and radiological examinations (the former including colonoscopy – an examination of the large intestine – and oesophago-gastro-duodenoscopy (OGD), an examination of the oesophagus, stomach and duodenum) and the latter including x-ray, CT = computer tomography, and MR (magnetic resonance)) complement each other here. Clinical findings (laboratory and inflammation parameters [CRP = C reactive protein, calprotectin and others], liver and kidney function) and histological findings (examinations of the tissues, including samples of the intestinal mucosa obtained during endoscopy) provide additional important findings. Indications of liver, gall bladder or pancreatic diseases must be followed up. Stool cultures and serological examinations are important in order to delimit diseases involving infectious diarrhoea. Only an analysis of the entire findings provides the overall picture of an inflammatory bowel disease. However, in some patients a primary classification into Crohn’s disease or ulcerative colitis is not possible. It can only be definitively determined during the course of the disease.

How can IBD (Crohn’s disease and ulcerative colitis) be treated?

Inflammatory bowel diseases (Crohn’s disease, ulcerative colitis) are still considered incurable. Therapy primarily aims to improve the quality of life of patients, to eliminate symptoms or to mitigate them, to minimise inflammatory IBD flare-ups and to prevent complications.  Knowing the exact place in the gastrointestinal tract is a key element of treatment. Alongside recommendations for dealing with the condition in everyday life and dietary advice, IBS medication is an important part of therapy and treatment with anti-inflammatory medicine predominates.

The first choice for ulcerative colitis is mesalazine (5-aminosalicylic acid). As medication via the anus is possible for CU given that the large intestine is mainly affected, it is possible to use suppositories and foams which can have a direct effect as well as tablets and capsules. For CU, glucocorticoids (cortisones), immune suppressants and antibodies against inflammation factors are also used. In addition, it has been established and proven in clinical studies that above all the gut bacteria have a decisive effect on the occurrence and course of ulcerative colitis. During the symptom-free phases, certain probiotic strains of bacteria have proven themselves to be just as effective and anti-inflammatory as mesalazine. Products containing gut bacteria act against the damaging causes of IBD and do not merely combat the symptoms. Using probiotics for IBS may be an optimal solution.

In spite of the wide range of medication on offer, it can still become necessary to carry out an operation. Depending on the main source of the inflammation, various operational procedures are used. Reasons behind operations can include complications such as severe bleeding, intestinal rupture, inflammation which is not reacting sufficiently to the medication, and the occurrence of colon cancer or the preliminary stages of cancer. The risk of colon cancer is increased in the case of ulcerative colitis and if the large intestine is affected by Crohn’s disease. The extent of the inflammation plays an important role here.

In the case of Crohn’s disease, glucocorticoids, immune suppressants and antibodies, also constitute the main therapy in terms of medication, primarily against specific inflammation factors. A differentiation is made between medication which improves symptoms in the inflammation phase (an active flare) and others which are designed to reduce the probability of new flares. In patients with CD, an operation becomes necessary when complications such as bleeding, fistulas, intestinal obstructions or abscesses occur.

There is some data available about products with frankincense, myrrh and camomile. They do have an anti-inflammatory effect. In the case of Crohn’s disease, a product with frankincense extract is claimed to have had similar results as mesalazine (which only has a limited effect on CD). The typical symptoms such as abdominal cramps, diarrhoea and joint problems improved in two thirds of patients. There were similar trials with ulcerative colitis. Frankincense and myrrh both contain triterpenoid acids which are responsible for their inflammation-inhibiting effects in UC. Myrrh has the additional effect of mitigating cramps, as it reduces the strength of bowel contractions and relaxes the bowel musculature.  The combination of the three ingredients of frankincense, myrrh and coffee charcoal has proven particularly effective. The symptom-free period was maintained just as long as with mesalazine, as was confirmed by a small study.

US scientists have also examined the anti-inflammatory effects of curcuma. In a study, children suffering from Crohn's disease or ulcerative colitis were given curcumin extract in capsules. A dose of 4g was tolerated well by most children and reduced the symptoms of this IBD.

Which tips are there for IBD? What can you do yourself?

Tip 1 - The precise cause of IBD is still unknown. However, a person’s mental state is an important factor in the occurrence of flares. Stress can trigger a new flare It is therefore important to include enough quiet phases and moments of relaxation in everyday life.

Tip 2 – Remove foods which cause flatulence and are hard to digest from your diet A nutrition diary can be helpful to find out which foods and drinks are well-tolerated and which situations have a negative effect on symptoms.  Be careful with fibre.

Tip 3 – Accepting the disease is an important step Self-help groups provide contact to other people with the same condition.

Tip 4 – The (also long-term) consumption of specially developed probiotics for IBS which protect the intestinal mucosa and balance digestive function is ideal to prevent the disease and as a supporting treatment for irritable bowel syndrome.

Tip 5 – Regular bowel cancer screening is a must for IBD

Tip 6 - In symptom-free periods, exercise has a provenly positive effect. Sport increases your general well-being, reduces inflammation, and one can get to know one’s body better. Less strenuous sports like walking, swimming, exercises, yoga and pilates are recommendable.

Tip 7 – If you take immune suppressants in the acute phase, you should take care that you are vaccinated against infectious diseases. Live vaccinations should only be used during symptom-free periods.

Tip 8 – Alcohol damages the intestinal lining and should be avoided

Tip 9 – Smoking increases the rate of acute flares in Crohn’s disease. CD patients should therefore avoid smoking. By contrast, in ulcerative colitis patients' symptoms become worse after they stop smoking. However, to start smoking now because of ulcerative colitis is not recommendable due to the numerous negative effects and complications.